The Euro is holding up fairly well against the US dollar and has even pushed higher as we navigate the European trading session which may seems surprising considering the disastrous economic figures that hit the market from the Eurozone around an hour ago.

The German ZEW economic sediment figures for March deteriorated sharply on thew back of the Ukraine/Russia war coming in at -39.3 from a previously solid reading last month of 54.3 and was also well below analysts’ expectations for a figure of 10

The same index from the Eurozone didn’t fair any better, coming in at -38.7 for the current month as compared to the 48.6 for the previous month and also well below consensus for a figure of 49.3.

The fact that market participants were able to brush off such disappointing data and support the Euro means the major focus is directed solely towards the Ukraine/Russia conflict and the outcome of peace talks over the next few days will certainly be the major factor in dictating the direction of the European currency.

“EUR support ahead would likely emerge from an easing of the Russia-Ukraine conflict, a possible Iran nuclear deal or OPEC output surprise that helps to stabilize energy prices, a shift towards more positivity on the euro area growth outlook and increased expectations of ECB monetary policy normalization, a hike in December goes ahead.” Said analysts from Normura.

“The negative risks for EUR include an extended geopolitical crisis that intensifies further into Q3, which could lead EUR/USD even closer towards parity of around 1.02-1.03 if we see fresh extremes in energy prices lead to factory closures.” The analysts added. 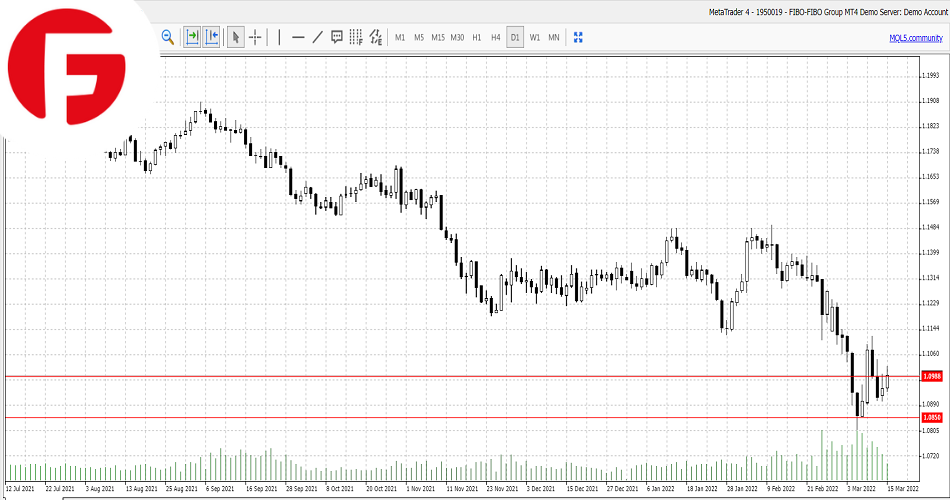 Looking on the daily chart, we can see that the Eur/USD currency pair has bounced significantly of a nearly 2 year low of $1.0850 reached on the 8th of March and as long as there is no serious escalation in the conflict, we expect this crucial support level to hold.

The other think to watch for is tomorrow’s interest rate decision from the US Federal reserve where a 25-basis point hike is already priced into the market. Some say there is an outside chance the Fed may deliver a 50-point hike to reign in the 40-year high inflation and if that happens, the Euro is in serious trouble.