The Euro hit its lowest level since July 2020 against the US dollar in yesterday’s trading session after another strong round of inflation related data from the US further fueled the post Fed rate decision rally in the Greenback.

The latest Gross domestic product (GDP) figures from the US which shows, the sum of all goods and services produced during the October-through-December period, rose sharply to 6.9% as reported by the Commerce Department against analysts’ predictions for a figure of 5.5%. It was also more than double the last quarterly reading of 2.3%.

This is just further evidence that the American economy is powering ahead and getting back to pre-pandemic levels and despite concerns over the omicron variant of the coronavirus, it looks like the US population has declared enough is enough.

Looking ahead today, it’s a busy day ahead on the economic calendar with the release of 4th quarter GDP numbers for France, Germany, and Spain during the European session and a positive round of figures may give the European Central Bank food for thought regarding its position on inflation and interest rates.

It’s a busy day ahead on the economic data front. Inflation and personal spending figures will be key later today. Another pickup in inflationary pressure would force the markets to price in a more hawkish rate path for the year.

In the American session the market will await the Personal Consumption Expenditures (PCE) Price Index figures which is used by the Fed as its preferred gauge of inflation and should the figure come in strongly, it will be terrible news for the Euro. 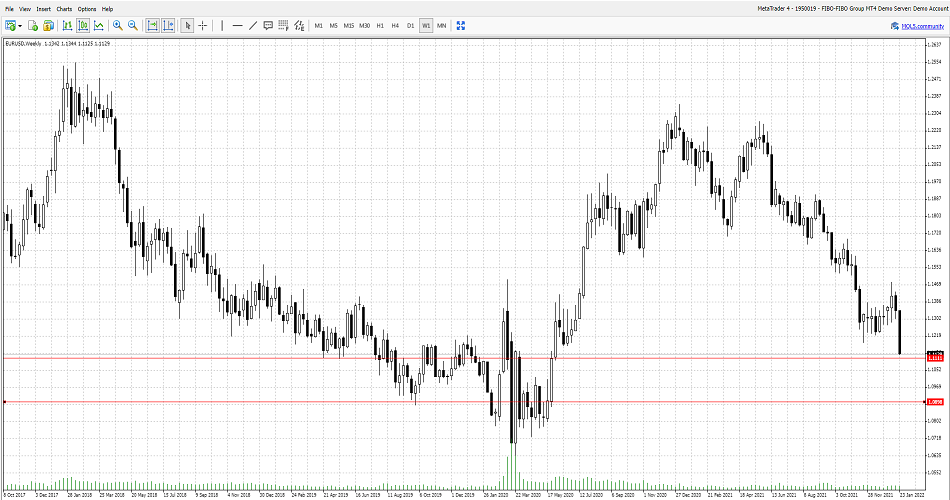 Looking on the weekly chart as we enter today’s European trading session, we can see that the EUR/USD currency pair has made a new 18 month low, and it just looks as if the bears a waiting for another reason to sell the currency pair down even further.

If we see a break of the $1.1100 support. level that will open the flood gates for a move down towards the next support level of $1.0898 and although this may not happen immediately, unless the ECB change their stance towards tightening monetary policy and begin the path to lift interest rates in tandem with the US, there is little in the way from stopping it hitting this mark.